Get it on Google Play Get it on Apple Store

We have defined replacement set and solution set and have even represented sets symbolically, but we have not discussed the concept of “set” formally. Let us do so now.

The idea of set is too fundamental to attempt to define. Let us merely say that any collection of objects shall be called a set. We have been calling those things which belong to a set the members of the set. We may also use the word element as a synonym for member. We shall continue to use braces, { }, to set off the members of a set and commas to separate one member from another. We shall use the symbol ∈ to stand for the phrase “is a member of.” For example, if we consider the set {1, 3, 5, 7, 9}, we observe that 1 is a member of this set, 57 is not one of its members, the set contains five elements, and 7 {is-in} {1,3,5,7,9}.

In Example 4(c) we observe that U = {empty} since the set containing all members of {0, 5, 10, 15, 20} not in U must be empty. In Example 3(d) the answer was also the empty set. These examples illustrate one reason for even considering a set with no members—it allows us to answer some questions (with a set) where we might otherwise have no available answer. Thus, any two sets have some set as their intersection and any subset of a universe has a complement. Of course, the empty set also creates some interesting results. If A = {0, 1, 2, 3}, we must conclude that {empty} is a subset of A, for it is true that {empty} is a set, and it is true that every member of {empty} is also a member of A. (For which member of {empty} is not a member of A?) Indeed, by this reasoning we are forced to conclude that the empty set is a subset of every set!

Each of the sets we have considered until now has had an obvious, unstated property. It has always been possible to list every one of its members. True, when there were many members we sometimes elected to make only a partial list or to use a verbal description of the members. But it has always been possible to list them all even when we chose not to do so. Sets which have this property we shall call finite sets. Thus, each of the following is a finite set: {1, 2, 3}, {4, 8, 12,...,40}, {empty}, “the set of natural numbers less than 1000.”

There are sets which are not finite. Such sets have so many members that no matter how long we might try, we could not list them all. We shall call such nonfinite sets infinite sets. It is important to realize that the reason a set will be called infinite is not our lack of time to list its members, or our lack of space to display the list, or our unwillingness to do so. Rather, it is because no listing can possibly be complete. Let us consider some examples of infinite sets we shall need as we continue our study of algebra.

Example 1  Show that each of the following is a rational number by expressing each as a fraction whose numerator and denominator are (positive) integers.

We may now summarize. There are four rather special infinite sets of numbers.

4. Q = the set of all positive rational numbers. All fractions with numerator and denominator natural number symbols, all natural numbers, and all (terminating) positive decimals represent quotient numbers.

All of the sets we have so far considered have been sets of numbers. Sometimes these sets were finite, sometimes infinite; one set was empty. We may also consider sets whose members are not numbers. For example, we could form the set whose members are people (such as the set of all current members of the United States Senate), nations (the set of members of the United Nations), or automobiles (the set of all automobiles licensed by the state of New York this year). We shall not want to investigate these sets in our study of algebra, but we will want to consider certain sets of points.

The concept of a plane is difficult to define. Let us agree that the flat page of a book, the top surface of a table, and the writing surface of a classroom blackboard are all examples of a plane surface. By a point of a plane we shall mean a particular position or location in the plane. A set of points in a plane is any collection of some points of the plane. We shall often describe a set of points by means of a picture.

Thus in Figure 1.1, A is the set of all points on and within the drawn circle and B includes all points within, but not on, the drawn rectangle.

Example 1  Decide whether A is or is not a subset of B.

We may also represent the complement of a set of points with a picture as shown in Figure 1.4.

Remember that it is necessary to have some universe whenever the complement of a set is discussed. The universe here is the set of points inside and on the rectangle U. Note that A consists of all points which are outside of the circle but in the universe. Since the circle itself is a part of set A, then it is not a part of set A, and this is indicated by making a boundary of A a dotted circle.

Example 3  In each case the universe is the rectangular set, and A is the set indicated by shading. Represent A by shading.

At times we shall want to consider sets of points each of which lies on some straight line. Figure 1.5 illustrates some sets of this sort. Set A represents all the points in a certain straight line. The arrowheads show that set A continues forever in both directions. We shall call set B a ray, a half-line which includes one end point and all points on a straight line which lie on only one side of that point. Set C will be called a line segment; note that it has two end points and does not continue forever in either direction. Set D is that subset of a line segment whose end points are not members of the set. We shall indicate this by using small empty circles at the ends. 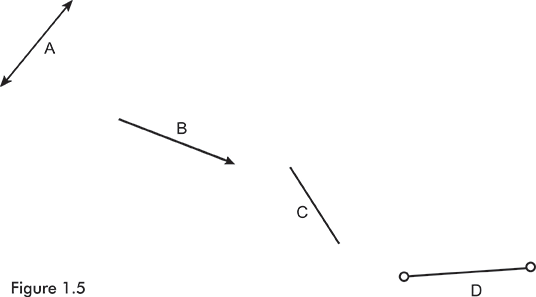 Example 4  Make Venn diagrams to show the subset relation of these sets of numbers.

Example 5  There are 100 boys in Delta Tau Delta fraternity. Of these, 75 take English, 60 take math, and 10 take neither English nor math. How many take: 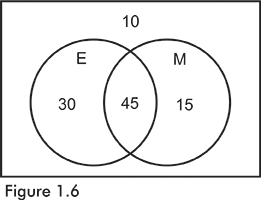